Wearing My Age: A crowd sourced meditation by women about the clothing they wear to work.

I had an idea:

The clothing we wear broadcasts information about us, whether we intend it or not.  If we clothe consciously, clothing can be a form of self-publishing.

What happens when the unconscious, the inferred, subconscious or even the intended meaning of our clothing is made concrete, embroidered on uniforms that can be read and worn?

I designed a uniform comprised of a jacket, a dress, a petticoat and leggings.I chose to represent degrees of personal space and privacy by the parts of the uniform.

•The Jacket was intended to be the public/corporate face of work.

•The Dress was still public but a bit more personal.

•The Petticoat was the secret thoughts.

•The Leggings were a summation.

The language for the garments was collected from a nationally distributed survey I wrote about clothing, power and work.

As I read the survey responses, one design change became necessary: The Jacket became the IN YOUR FACE garment rather than the corporate-face-of-work garment. There were few responses about the importance of proper dress in the workplace. Instead, the responses highlighted the hard work of being heard and trusted in the workplace despite conformity to workplace values.

From the survey responses, I learned that the same old issues of the 1970’s feminists remain. Women are still paid less, respected less, and heard less than men.  Their potential for pregnancy is still regarded as an obstacle to advancement. They are looked on as sex objects. And women are still angry!

(Generously funded by The Jerome Foundation.) 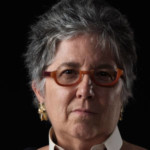 Susan Hensel
Susan Hensel is a multidisciplinary artist, with a 50+ year career, who combines a mixed media practice with embroidery across digital and manual platforms. Susan received her BFA from the University of Michigan in 1972 with a double major in painting and sculpture and a concentration in ceramics. With a history, to date, of over 200 exhibitions, more than 30 of them solo, twenty garnering awards. Above all, Hensel’s desire to communicate stories through art continues to be a powerful motivator. Hensel’s artwork is known and collected nationwide, represented in collecting libraries and museums.